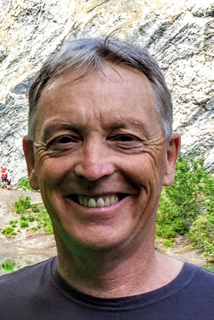 Tom was born in Sudbury, Ontario and moved to Vancouver in 1976. He graduated from SFU in 1980 with his teaching certification. During the 1980’s he managed social housing units for BC Housing. He and his family moved to Nelson in 1989 and Tom began teaching/counselling at Salmo Secondary School.  In 1998, Tom received his Master’s degree in Counselling Psychology from UVic. In 2003, he was elected President of the Nelson District Teachers’ Association, a position he held until his retirement in June 2013.

From 2006-2016, Tom was a mediator with the BC Teachers’ Federation’s Internal Mediation Service, holding the position of Chair for four years. He has, for many years, been the Secretary of the 6 Mile Water Users’ Community up on Heddle Road.

During his first term as Director from 2014-2018, Tom was elected Chair of the Central Resource Recovery Committee.

Tom is an avid golfer and skier and enjoys gardening at his home in the wonderful Heddle Road area.

Tom and Marg have been married since 1978 and are the proud grandparents of four grandchildren.