The Department received the award on the weekend of April 28th when hundreds of firefighters from around the Province gathered in Grand Forks for the Province’s annual Spring Training.

Throughout 2016, the RVFD was active in the community with several initiatives in the area of Fire Prevention. The RVFD worked towards being a FireSmart community in May. Part of this process was conducting an open meeting for the public where attendees were provided information on how they could make their own properties FireSmart. In addition, several RVFD members went into classrooms at the Robson Community School (RCS) and conducted fun educational sessions. Part of that process included holding a colouring contest with lots of cool prizes and also a family BBQ party. The BBQ was conducted after the May 7th Wild Fire Preparedness Day when over 40 community members came together for a common goal of making a particular area more protected from wildfire.

Another focal point for the year was surrounding Fire Prevention week in October. Every class from RCS – K to 7 – visited the fire hall and attended a 20-minute talk on the Fire Prevention Week topic – ‘Hear the Beep where You Sleep’ and a 20-minute session where each student got an opportunity to knock down a target with a hose stream. The kids loved it. In addition, a contest was held where each student had to draw an evacuation plan for their home. Three prizes were awarded per class and one lucky student had a fire helmet put into their prize pack indicating that they had been chosen as the ultimate winner and Chief for the Day!! Delivering that reward was particularly fun! The RVFD was also very active with RCS’s Strong Start Program.

“It’s an absolute honour for the RVFD to be recognized in this way. However, I can tell you that volunteers in hundreds of halls around the province do very similar activities and my hope is that those volunteers are thanked for their efforts as often as possible,” said RVFD Captain/Fire Prevention Officer Dustin LePage.

Adds Chief Grant, “Indeed the recognition is nice but it’s truly about continuous improvement at the RVFD. We just came out of two great courses that we were able to instruct in-house with our own members. A 40-hour First Responder Course was over held two weekends and conducted by our Deputy Chief Fred Vigue. This saw the RVFD gain five fully qualified first responders. This is a major enhancement to our service by allowing us to provide more reliable responses.

Our second course was a Hazmat Operations Course that was conducted by Captain Mark Smith. This course is an advanced hazardous materials response course that trains how to deal with more complex situations. Both these courses are major commitments and I couldn't be more proud of the membership for stepping up and completing the training. We have always prided ourselves on training and it shows again here. I couldn't be more proud of the team at the RVFD right now.” 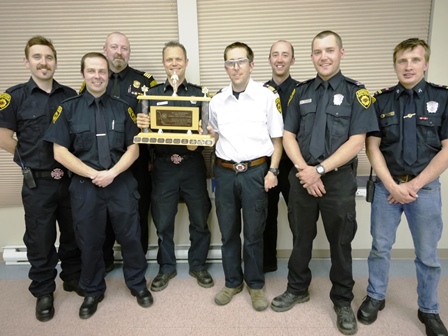